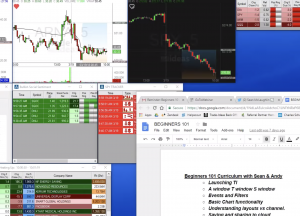 There are quite a few good trading ideas out there since it’s January, and you know that means we are in a big month for investors. Are you placing quite a few trades? Instead of talking specific securities, let’s talk strategy. I want to tell you about a move I would like to employ more as I continue to delve more into the world of investing.

Let’s say there is a company XYZ. I want to buy 1000 shares of company XYZ. I decide to make that investment, but I want to look at some options, too. I see the covered calls are paying quite the premium, and I decide to go ahead and write 10 of them for the shares I own. Let’s say I write the covered calls to expire in a year, allowing me to collect a heftier premium and also collect dividends along the way.

But I’m not done yet. Let’s say I also want to look at selling puts for XYZ. I am bullish on XYZ and wouldn’t mind owning more shares if the stock went on a temporary decline. And if it goes up too high and my other shares get called away, I collect the premium on the puts, too. So essentially I am buying more insurance, and let’s say the put premiums are too hard to pass up.

They look good so I will control 1000 shares by purchasing them directly and let’s say I sell 10 puts for another 1000 shares. That would be a really interesting way of investing in a stock I was bullish about, wouldn’t you say? You can also buy calls and sell calls at the same time, buy puts and sell puts at the same time, or employ other combinations. The move I described is one I want to use based on being bullish about stocks and collecting the most premiums.

There are all kinds of trade ideas as mentioned. This is just one option I wanted to tell you about as I continue to look forward to investing more, and I figured you might benefit from it as well. You definitely want to get to know the options market if you’re going to invest in the stock market in today’s world. However, that doesn’t mean you dive in too early. You have to really get to know options before you start using them to increase your market profits.